Dormant Defender Disguised as a Bully 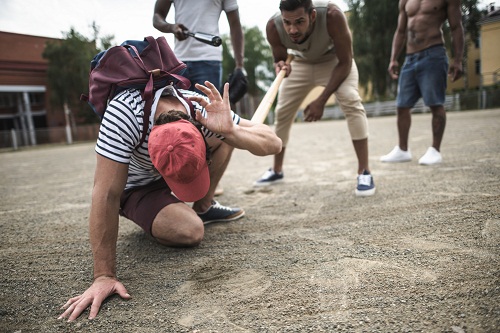 Dormant Defender Disguised as a Bully

If a bully is someone who deliberately down-ranks and demeans a vulnerable other, imposes unwanted stress activation to achieve a premeditated interpersonal effect, conjures waves of predatory-derived dopamine as an anticipatory pleasure inducement, and invites a celebratory audience or enlists allies to heighten the experience, could I become such a one? Have I been such?

I recall a grade 9 gym-class locker-room incident. Surrounded by cheering supporters I picked a fight with an annoying classmate. He didn’t want to fight. He looked scared. I remember his para-verbal expressions of fear and helplessness as he stood before me. Somehow, despite his anxious display, the circling crowd demanding a sensational and satisfying outcome, and the incongruent nature of knowing myself as a quiet, unassuming introvert, I nevertheless punched him in the stomach. As his posture folded, I kneed him in the face. He fell to the ground. And like a self-convicted criminal, I ran from the scene only to be arrested by the gym teacher in the hallway to face justice soon after.

Fast forward 40 years since this memory was ingrained as evidence against me. I evolved to become a correctional Chaplain and a Psychotherapist. But my memories remind me that a bully once occupied this life I now regard as a remorseful, reformed, nurturer of self and others.

So, after nearly 3 decades of witnessing bullying behavior in correctional settings, I offer some reflections on the experience.

1. Bullying behaviors are evidence that an individual has underlying issues (not excuses). These issues are often complex (more than one) and may include biological, psychological, developmental and/or social factors. A myriad of influences contribute to how an individual thinks, feels and behaves – not just one.

2. Core values and beliefs are formed to reinforce behaviors. An individual presenting with bullying behaviors has developed what we call cognitive scripts (pre-existing knowledge structures that have evolved from personal experience) that (un)consciously declares, “I have to demonstrate my strength to be accepted and be validated by my peers”, or, “I’d rather be a wolf than a lamb”.

3. Lack of empathy. A decision to confront, challenge or intimidate another individual often de-personalizes the engagement by focusing on the goal of the confrontation (e.g., to instill fear, to impress friends, to degrade the status of a targeted other).

4. Identity formation. Bullying behavior is indicative of a motivation to establish one’s reputation, to distinguish one’s self from others perceived as different or inferior, and to compensate for personal vulnerabilities by accentuating a persona (projected social image) of confidence.

As a former bully, I have felt the allure of predatory excitement supported by hormones and peer approval. But that was then. Today my therapist-self witnesses the astonishing, illogical and bloody re-enactments playing out in the correctional environment. Yet I wonder, through the maze of a bully’s becoming, wherein lies the vulnerable victim-avoidant self? Or better yet, “Arise oh dormant defender! Behold yourself in those you hold with such masked contempt.”