THE STAGES OF CHANGE 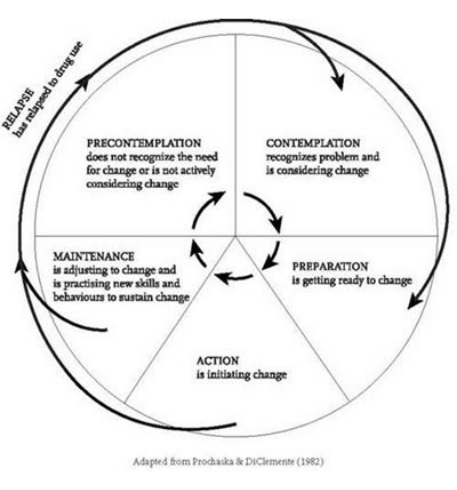 THE STAGES OF CHANGE

While changes such as quitting smoking or drinking are often thought of as an event, what is not often realized is that there is a process involving a series of changes which occur over a period of time. In the early 1980’s, James Prochaska and Claudio DiClemente developed a model to provide some explanation of this process which has been subsequently refined to the model shown in the diagram below; usually referred to as The Stages of Change:

Initially, an individual is in a state of PRECONTEMPLATION. Through being uninformed or under-informed he/she is not aware that there is an issue that needs to be dealt with. Individuals demoralized through having unsuccessfully tried numerous times before to change may also be here.

Once the individual begins to wonder if there is an issue he/she moves into a state of CONTEMPLATION. In this stage the individual begins to weigh the pros and cons of making changes. They compare the good things about their current behaviour with the not-so-good things about it. This can lead to indecision and uncertainty, usually called AMBIVALENCE, and individuals can remain “stuck” in this state for a considerable period of time, seeming to procrastinate making a final decision.

Once the balance has “tipped” in favour of change, the individual moves into a state of PREPARATION. At this point, the individual has made the choice that change needs to occur, but they do not know how to go about it. This period is characterized by seeking out information, setting goals and planning strategies on how to begin to put the change into place. Sometimes individuals become overwhelmed and uncertain during this stage and revert back into Contemplation for a further period of ambivalence.

From the Preparation stage , the individual puts their planning and new knowledge into ACTION which is when their new behaviours become noticeable. To count as ACTION the change must be meaningful, for example and having three drinks a night instead of four would not count.

Once the new behaviours have been in place for four to six months the individual is in a state of MAINTENANCE. Helpful at this time is attending a relapse prevention group, being aware of urges and temptations to revert to the old behaviour and what triggers those feelings, and establishing good support to encourage progress.

The other noted feature of this model of change is RELAPSE, when the process of change experiences a setback. This can occur during the Action or Maintenance stage and results in the individual cycling back into the Contemplation or Preparation stage. While it is preferable to avoid relapses, properly examined they can provide learning opportunities to help bring about lasting change.

This model is widely used and can help individuals to: 1) understand the steps involved in making change; 2) accept that not everyone may be ready for change; and 3) change happens in different ways and is not often a smoothly occuring sequence of events.