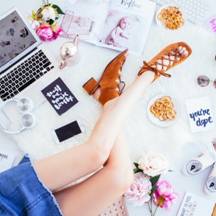 Photo by Hipster Mum on Unsplash

Cell phone addiction is a behavioural disorder. It goes beyond just talking on the phone; teens play games, social media, movies and more. Applications (APPS) like Snapchat is one of the most common photo sharing apps used by teenagers who are looking for acceptance and approval; which leads to comments not always positive to their self-esteem.

The last thing your teen wants to hear is “get off your phone”. It’s a life line, similar to addictions to Nicotine or Cocaine, they get a brain release of Dopamine. There’s a biological component to this behavior. The brain reacts to the cell phone as if it were a drug. Studies have shown that both the phone ringing and the alert of a new text cause the brain to release dopamine. The addictive use of a cell phone often leads to a behaviour disorder; such a disorder means obsessive use that affects every day functioning. Like any addiction, once triggered, it can be quite difficult to stop. The average teen is on their smart phone 9 hours a day. Let’s just put nine hours in context for a second. That’s more time than teens typically spend sleeping, and more time than they spend with their parents and teachers.

Why I am sharing this topic? Through US research it has been recently proven cellphone addiction is a direct linked to depression in teens. “More girls are generally willing to seek out therapy or reach out for help for depression than boys” said Dr. Sandra Mendlowitz, a psychologist in the child and youth psychiatry outpatient program at Toronto’s SickKids Hospital. Mendlowitz reported social media plays a large role because having a social media presence is important in teen’s lives. “You can have a number of likes and dislikes that many teenagers see as destroying their sense of self, that’s why it’s important to be careful about posts and how you’ll handle the responses,” said Mendlowitz in an interview with CBC News Network.

Signs and symptoms of depression in your teens:

If you notice any of these signs, it should be taken seriously and recommend you make any appointment with myself at Bayridge Counselling Centres.

I have some helpful tips on how to limit cell phone use not only teens, but all of us. No cell phone at the dinner table, it’s a wonderful way to encourage conversation among family members. Buy alarm clocks and charge your cell phone in a different room. Cellphones in the bedroom disrupts sleep, in addition makes it easy to fall into the trap of checking Instagram until 2am. Decide as a family a device curfew, research shows you need an hour of downtime to settle before a good night sleep. I disconnect the internet at 11pm every night, so the teens in my house have no choice but to get a good night sleep.