What is Premenstrual Dysphoric Disorder (PMDD)? 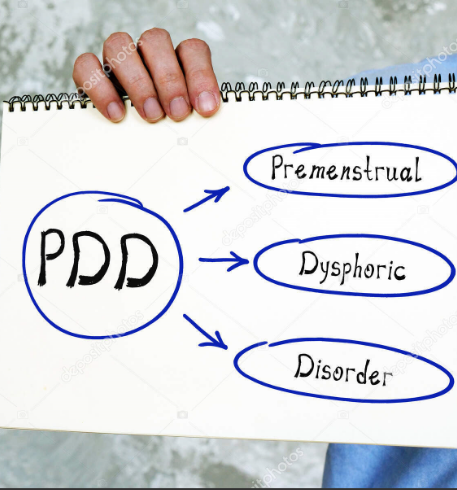 What is Premenstrual Dysphoric Disorder (PMDD)?

Approximately 1 in every 20 women who are menstruating, suffer from premenstrual dysphoric disorder (PMDD), a condition that is characterized by intense emotional and physical symptoms that occur between ovulation and menstruation. PMDD is like supercharged premenstrual syndrome (PMS) with severe symptoms 12 to 14 days of each cycle, year after year after year. The cumulative effects of these repeated symptomatic periods can wreck a woman’s life as well as that of her family (Daw, 2002).

Dr. Jean Endicott has conducted studies of mood and behaviour related to the menstrual cycle since 1975. Women report that their PMDD symptoms have seriously hindered relationships with relatives, friends or co-workers as well as with significant others. Often, relationships have been lost because others say that they can no longer put up with some of the recurrent behaviours. These women have difficulty keeping a partner and, the divorce and separation rate is high amongst this cohort. Many have also missed out on promotions at work, or have lost jobs because of their condition.

Even during the ‘non-premenstrual’ phases of their cycle women report that they frequently experience a sense of dread and helplessness as they anticipate the next period of uncontrollable symptoms. They also are hesitant to plan ahead, feel bad about the effect their condition has on others, and worry about the future.

To be diagnosed with this disorder, 5 of the following symptoms are present in the week leading up to menstruation and cease upon the commencement of the period:

Certain symptoms of PMDD are identical to those of major depressive disorder (MDD). Therefore, it is important to receive an accurate diagnosis from a qualified and trained professional. The key difference between PMDD and MDD is that PMDD symptoms are cyclical, occurring once a month at a specific time in a women’s menstrual cycle, while the symptoms of MDD are ongoing. This distinction is reflected in research. Endicott and a panel of experts determined in 1999 that PMDD is a distinct clinical entity, based on studies they examined that suggested that PMDD sufferers have “normal functioning of the hypothalamic-pituitary-adrenal axis, show biologic characteristics generally related to the serotonin system, and a genetic component unrelated to major depression.” A correct diagnosis is imperative to receiving appropriate treatment.

PMDD was classified in the Diagnostic and Statistical Manual of Mental Disorders, Fourth Edition (DSM-IV, now DSM-IV-TR) as a mental illness in the nineties presenting considerable controversy amongst health care providers. Endicott (1999) says that it “is a real biological condition for which women seek treatment – and for which effective treatment is available.” For women who suffer, it is comforting to have a professional validate their experience. However, a biological condition does not equate to a mental illness. Caplan (1995) suggests that the language surrounding PMDD is misleading and that its classification as a psychiatric disorder stigmatizes women as mentally ill and covers up the real reasons for women’s anguish. Joan Chrisler (2002) believes that it is appalling that suffering women require a label of PMDD to be validated and provided with the appropriate treatment.

In the midst of this controversy, women are suffering and are in need of help. Naturopathic medicine recommends the use of estrium – a medical food clinically tested to improve hormonal balance, as well as t.a.p.s. – a supplement to improve liver functioning for the elimination of excess hormones in the system that are contributing to PMDD. Other treatment options include lifestyle changes like regular exercise and eating healthy foods, taking vitamins such as folic acid, calcium, vitamin D, magnesium, vitamin B-6 and vitamin E, or the supplements black cohosh, chasteberry, or evening of primrose. Another option is using medications such as zoloft, sarafem, paxil, or yaz – a birth control pill approved by the FDA. Individual counselling, group counselling, and stress management are also highly recommended to aid the sufferer of PMDD.